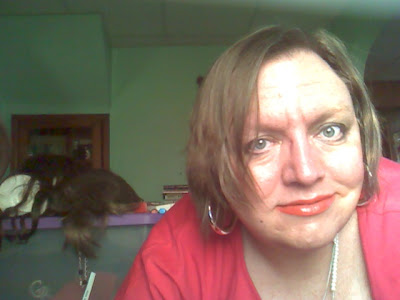 It was an up-and-down week here in the middle of nowhere.
Well, technically I don't think I live in nowhere, but I can step outside and see it on the horizon.
It was down for a bit, then up in a good way at the end. "Always finish strong," as the saying goes.

First, the down part. Last week is normally what was the busiest week for me at my old job.
Suffice it to say, it wasn't busy at all and that hit me harder than I was expecting.
I'm mostly at a point where I'm able to keep that job in the past, but the emotions snuck up on me for a while.

That changed Saturday, thanks in part to a headache. Not a fun way to go about it, but I took my Excedrin Migraine, grabbed an ice pack and laid down. Surprisingly, even though I'd slept eight hours the night before, I wound up sleeping another four.
It screwed up my sleep schedule for the weekend, but the angst I'd been feeling before was gone.

Fast forward to this morning. I was talking at a trans site where I'm a member. It's been a good place for me for the most part.
I sit back and listen some times, especially when the women farther along in transition start talking nuts and bolts of the process.
It can be helpful to listen and learn.
Plus, I sometimes feel it's like going off to sit at the little kids' table, where those of us at the Trans 101 stage sit while the grown-ups talk about the advanced stuff.

In the chat at the site today, I was talking a bit about the philosophies I've come to on this journey so far. Nothing set in stone, mind you, just where I'm at during this particular time.
One thing that came up was something that I mentioned in an earlier entry -- that transition doesn't end with the GRS. It's a destination, but not the last one.
As one of the other women put it -- It's not about the surgery, it's about LIVING after the surgery.

The thing that I was left with after the conversation was the fact that I was able to converse with these women, who are farther along than I am and whose viewpoints I respect and be able to not sound like I was talking out of my backside.
I clearly don't have all the answers or know all I need to know.
But it was a little reassuring anyway.

The thing that hit me afterwards was that I was starting to really gain some perspective on things. It's a perspective I might not have had if I'd rushed headlong into things. I definitely feel more integrated than I did before. I don't want to lie and say I feel good about certain things, but I am feeling more comforted and positive about the future.

Limbo sucks. Limbo's not a place to set up permanent residence. But might as well make the most of it to truly think about things while I've been here.
I look forward to jumping out of limbo on the road to womanhood. It's time. Beyond time now.
There's a leap of faith coming. I can feel it.
Always finish strong.