Note: Wow, that seems so long ago, back before the HRT, during the days when I still had to wear the wigs. 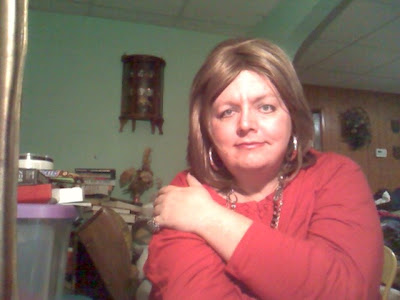 Sitting here, in a red paisley skirt and matching gold top (the above pic was taken yesterday, before I watched Nebraska play its worst bowl game that I can remember)...all made up with no place to go.
It's a little after 7 p.m. as I start typing this, meaning there is less than five hours left in a year that was, well.. I'll be charitable and call it "interesting."
New Year's is supposed to be a time of celebration, of looking towards the promise of the year that begins when that clock strikes midnight.

In this corner of the world, it's an occasion marked with a mix of relief and dread.
It's a good thing that 2010 is over for a lot of reasons, noted elsewhere in this blog.
The dread comes in the nagging feeling that the better things will go away, that there will be no way to act on the truths that have revealed themselves.
It's the nagging fear that the isolation, the being trapped will only grow worse
The dread that..,365 days from now I won't have any more hope of being able to live as my true self and to one day shed this body I was given as some sort of prank for God's amusement.
A little harsh and mopey? Perhaps.

But try as I might, I can't be Pollyanna. I can't suddenly become Little Miss Happy.
It's not like I don't want to be more optimistic, but after a time, when nothing changes, those aren't the emotions that come into my head.
The "fun" of all this is that I'll probably feel the exact opposite tomorrow. It's life on the emotional rollercoaster.
Part of the reason I have a hard time being all uber-positive all the time is that it's a set-up to get hurt. It presupposes that positive thoughts have the power to override the universe and cause other people to act differently and circumstances to change instantly. It's like magic, right?!?!?!
Expect the worst. That way, anything less than that is actually good, rather than a disappointment from expecting too much.

It might be time to consider some goals for the upcoming year.
Not resolutions.
That is a word that seems to be a recipe for failure too often. How many resolutions have you failed to keep in a year? Exactly.
So, maybe the first goal is to be more positive in the upcoming year.
Another one? Gotta lose weight, for my health, for my ability to transition and, let's face it, the fashion options are better the smaller you are.
I also want to work more and more to being better able to blend (a term I like so much more than 'pass')
In general, I just want to be some place on December 31, 2011 and be closer to being the real me 24-7.
I would love to not be alone, to be celebrating with friends, maybe even celebrating it with the one I love...or both! Why not? I'm Ms. Positive now, right?
Here's hoping you don't get the worst, no matter what your expectatoins are.
Have a great 2011.