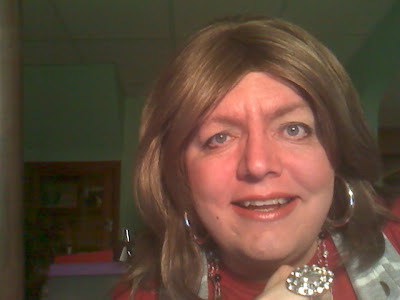 It's been an interesting run of late in my cyberworld.
When one is on their gender journey, it's not easy. There are stops and starts. There are situations where people are slow to accept.
But there are moments where it's worth it, where there is happiness.
And, with any luck, that's when there's a camera around.

I'll cop to becoming a bit of a picture diva since I've started at least progressing on my look. After denying who I was for a couple decades or so, there is a little bit of playing catch-up before I settle down.

I'm not going to lie and say everything is great in my life, because it's clearly not. There are days where I'm very emotional and it's tough to keep going.
But I have the support of family. I have some good friends. And I have the pictures.

Because you know what? The smile doesn't lie.
I talked in my last blog post about my visit with two good friends in Omaha. The pic in that post was from that trip.
I had an aunt comment on the pics from the trip.
She said, "Kara, I have never seen you smile that way before, it looks very good on you. And you look soooo beautiful. Am so happy for you."
It was a lovely compliment.
And she was right, at least in terms of me never smiling that way before.
When I'm the real me, I am smiling, I am truly happy.
I never liked smiling for photos as "him", it always felt forced, never natural. Smiling as Kara? Totally natural.

I'm not the only one.
I have a friend who, I'm happy to say, took a big step in the last week when she fully admitted that she is a woman and that she plans on fully transitioning.
I'm thrilled for her, due in no small part because we've talked a lot and I have an idea of what it's been for her to get to that point.
It's interesting when you see recent pics of her, both at a makeover and on her own.
You see a smile, a twinkle in the eye. There's a happiness and sense of contentment there.
And in talking to her, there was.
The smile doesn't lie.

I see it in other pictures of friends. Some are post-op. Some are in full transition mode. Some aren't in transition yet, but soon. Others are striking a balance in their lives and aren't transitioning at all.
But when I see the expressions in so many photos, I see that, for whatever is not going right in their respective lives, being themselves can be a good thing.
The smile doesn't lie.

For those of us who aren't there was fully as they'd like to be yet, I hope you get there. I hope that the smiles aren't limited to snapshots, digitally captured moments in time.
Because we are all supposed to have life, liberty and pursuit of happiness. And being trans shouldn't exclude us from that.
Smiles don't discriminate and they don't lie.

Look at the pic above this post. That's me, waiting for my good friends to arrive to pick me up for that trip. I was so looking forward to a trip that was so worth it. I was smiling on the inside just as much as I was on the ouside.
And that's the truth.
Posted by Kara Tucker at 8:50 PM